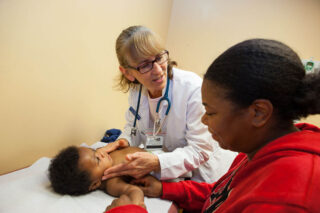 In 2005 Dr. Erica Turner was looking for a new part-time position as a pediatrician.  A friend told her that ChesPenn Health Services had just opened a new health center in Coatesville.  Soon after, she accepted a position that divided her time between Coatesville and ChesPenn’s Chester locations.  One of her earliest experiences was of testing ChesPenn’s first electronic medical record before its use was expanded to the larger organization.   This was in the days before the Pennsylvania Statewide Immunization Information System was created and she remembers having to enter each child’s entire vaccination record into the system.

After 17 years caring for families in the same community, Dr. Turner enjoys seeing children grow and change.  She also likes a puzzle –  doing the detective work to solve a mystery when a patient’s illness is difficult to diagnose.  Her love of puzzles made studying science in college seem like a good choice.  She jokes that the decision to become a pediatrician after she started medical school came because she saw that pediatrics was the only specialty where she could sit on the floor with her patients.

One of her biggest sources of satisfaction comes from helping children feel safe during their visits.  Often children bring a doll or stuffed toy with them, so she first “examines” the toy with the child’s help, which makes the exam less scary when it’s the child’s turn.  One child had no toy with him but had a bear on his shirt.  Dr. Turner and the child took turns listening to the bear’s heart and checking his ears, and then she did the same for the child.
This approach gets children excited about being active participants in their visits, making them more fun and less scary. 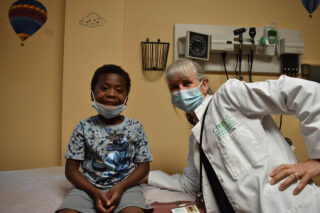 Having also worked in a private practice, Dr. Turner appreciates the opportunity to help parents who often struggle with so many life challenges that focusing on their children’s health needs can seem overwhelming.  She shared that “It feels like a win when I can convince parents to take the next step to improve their child’s health.  Sometimes people need an extra minute of listening and compassion.”

Copyright by ChesPenn 2022. All rights reserved.